New Delhi: Two days ago, on Monday, Monday 17, a mosque in the central Uttar Pradesh town of Barabanki was demolished by the administration in defiance of an order of the Allahabad high court. The Gareeb Nawaz Al Maroof Mosque had been around for at least six decades, according to electricity bills held by its committee members, and was registered with the UP Sunni Waqf Board.

But there is a backstory to the demolition which explains the relative ease with which this act of erasure – planned several months ago – was eventually accomplished.

On March 20, a day after protests broke out against the administration’s plan to demolish a mosque in Uttar Pradesh’s Barabanki, close to 180 Muslims were booked under serious charges, including attempt to murder. It is important to note that in FIR 89 – the main FIR, which named 22 people and charged another 150 “unnamed” – 16 named and several of the unnamed accused were granted bail in a district court on April 12. Around six additional FIRs were filed in relation to this and roughly 30 people are still in jail, locals say.

On April 11, nearly three weeks later, Barabanki police also arrested one Ishtiyaq alias Sonu in this case under the National Security Act (NSA), considered to be a draconian law often used to target dissenters. An official press release by the police on the matter said that he was arrested in a mission against criminals in the district. “On April 11, the administration took action against a dreaded criminal Mohammad Ishtiyaq, son of Mohammad Iliyas…who had attacked and attempted to murder police force on March 19.”

Five weeks later, the mosque was demolished with the administration claiming the mosque’s supporters “ran away” and chose not to contest the demolition order.

Documents related to the mosque. Photo: By arrangement

The fact is that the indiscriminate arrests made in March weighed heavily on the community’s mind, say locals. No Muslim “dared” to protest on the day of the demolition, Maulana Mustafa told The Wire. “They did not even dare to go close to the mosque while it was getting demolished because of fear of the police,” he said. Locals say that dozens of Muslims have left their homes since the incident and are hiding in other areas because they fear being incriminated in fake cases.

On March 15, the mosque authorities received a notice questioning the presence of an “unofficial mosque”, requesting evidence for the permission they had to occupy the land. It also cited a court ruling that said illegal religious constructions could be demolished if they caused obstructions.

The ruling cited says that if any religious structure has been raised encroaching upon public road (including highways), streets and lanes before January 1, 2011, a scheme shall be worked out and executed to shift it to private land to be offered by the beneficiaries of such religious structures or persons responsible for its management or to remove it.

Photos of the mosque and compound in Barabanki, before (L) and after (R) the May 17 demolition. Photo: Special Arrangement

The mosque authority says that they had filed a detailed response in this matter, including an electricity bill from the year 1959. The response also made it clear that the mosque was not obstructing traffic on the road. However, the administration never officially acknowledged their response and proceeded with the demolition.

On March 18, three days after the notice was sent, the mosque committee knocked on the doors of the Allahabad high court with concerns of “imminent demolition” of the mosque. The high court disposed of the petition and ruled that the local administration was only seeking documentation. “In any case, considering the fact that the notice has been given to the petitioners only for the purpose of seeking documentary evidence, and not for demolition, nothing needs to be proceeded any further in this writ petition,” the order said.

According to locals and photographs that The Wire has seen, the debris of the mosque was thrown into a river. Since then, security forces have been deployed in the area to prevent people from coming to the location of the mosque.

Residents also say that a wall was being built to block access to the mosque. On March 19, Muslims were disallowed from offering Friday prayers inside the mosque, which resulted in tension and protest. At least 35 protesters were arrested and several serious charges were levelled against the protesters. 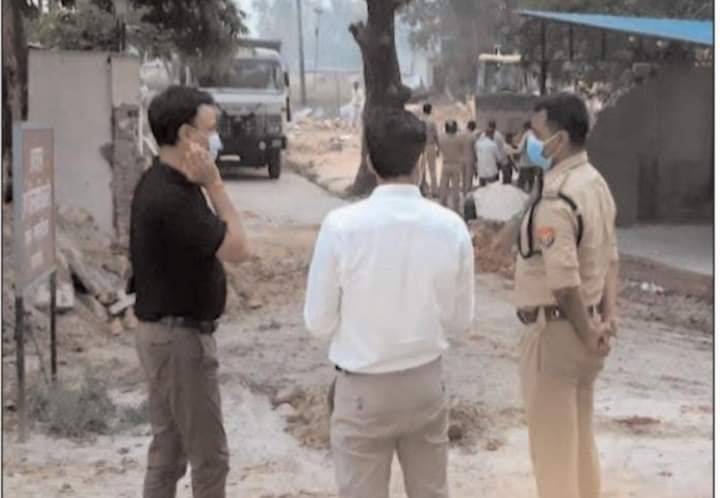 In violation of HC order

The mosque committee says the demolition was in violation of a high court order issued on April 24, stating that buildings in the state should be protected from any eviction or demolition until May 31 “in the wake of the upsurge of the pandemic”.

In that order, the Allahabad high court said, “That any orders of eviction, dispossession or demolition, already passed by the High Court, District Court or Civil Court, if not executed till the date of passing of this order shall remain in abeyance for the period till 31.05.2021.”

Zafur Ahmad Faruqi, chairman of the Uttar Pradesh Sunni Waqf Board, condemned the demolition, calling it “illegal.” He added that this will further alienate the Muslim population in the state, referring to the Babri masjid’s demolition by right-wing groups in 1992.

In a court ruling in 2019, the Supreme Court handed over the land to Hindu groups, permitting the construction of a new Ram temple, which is now under construction. However, the Supreme Court had also noted that the demolition of the Babri Masjid in Ayodhya was an “egregious violation of the rule of law” and that “Muslims have been wrongly deprived of a mosque which had been constructed well over 450 years ago”.

On their part, the authorities in Barabanki deny that the mosque was demolished. In court, the administration said that several residential rooms had cropped up along with the mosque and it was an illegal structure which was encroaching upon the road. When The Wire reached out to district magistrate Adarsh Singh, he reiterated, “No mosque has been demolished. It is just not true.”

Barabanki superintendent of police Yamuna Prasad said in a press release that this was an illegally constructed “residential complex” in the tehsil compound opposite the SDM house. No mention of the mosque on the site was made, even though its presence had previously been officially acknowledged in the notice served on March 15.

“On March 15, a notice was issued and they were given a chance to clarify the ownership details of the said structure,” the SP said. Upon getting the said notice, the people residing inside “ran away”, he added. “Considering the safety of the tehsil compound, the authorities took over the structure on March 18. On April 2, after a writ in the Allahabad high court, we got to know that the structure was illegal. We made a case before the SDM, and then on May 17, we took action as per his orders,” Prasad further said.

Dozens of people in the area have left their homes so far and the rest live in fear, a Muslim resident who wished to stay anonymous, told The Wire. Syed Farooq Ahmad, another resident of Barabanki, said, “People got scared. They were worried that more people would be implicated in fake cases and left the place as soon as they could.”

He added that since the court promptly granted bail to many people, it was clear that the FIRs had been filed without any basis or investigation. He said, “It became clear that these FIRs were filed by the police simply to scare people so they do not speak against the demolition or protest it. None of the charges could be proven in multiple cases, and the court granted bail in the first hearing itself,” Ahmad further said. 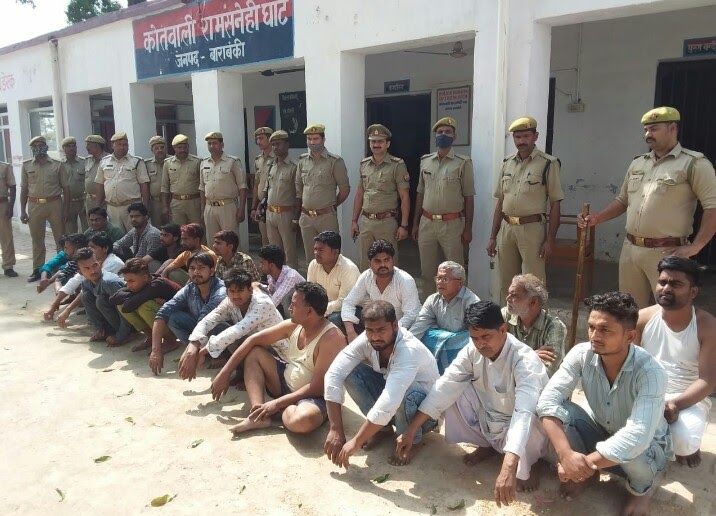 Men arrested by the Barabanki police after protests. Photo: By arrangement

At least seven FIRs were filed on March 20, a day after Muslims protested the demolition plans. People were booked under sections of the Arms Act. Other charges, such as rioting, unlawful assembly, attempt to murder and causing grievous hurt to deter a public servant, of the Indian Penal Code.

Several were also charged with Section 7 of the Criminal Law Amendment Act, 1932, which deals with molesting a person to the prejudice of employment or business.