The video features Maktao and Kiombo, two orphan elephants under the care of the Sheldrick Wildlife Trust in Kenya.

Two baby elephants won the hearts of many with their adorable antics.

Videos featuring baby elephants are instant mood-lifters and many will agree with us. If you are also fans of these cute baby jumbos, then you will definitely fall in love with Maktao and Kiombo, two orphan elephants under the care of the Sheldrick Wildlife Trust in Kenya. The adorable video has now gone viral and will leave you gushing too!

The clip starts with the two baby elephants playing with each other as their nanny, Quanza, keeps a close watch. If you’re wondering about how to apply for the post of nanny for these cuties, let us tell you that older elephants are made nannies to look after the baby elephants only, so Quanza is an elephant! As the video goes on, Maktao and Kiombo start pushing each other ‘politely’ in an adorable game. However, Quanza gets up and breaks up the duo’s ‘fight’.

“Maktao and Kiombo are such calm elephants — even their pushing matches are a polite affair! Still, their nanny Quanza decided to step in and break up their game, lest things get out of hand. She needn’t have worried: Unlike many growing bulls, Maktao and Kiombo have a very civilized friendship. The scene at the end of this video, where they enjoy a peaceful bottom scratch side by side, is more indicative of their general behavior,” read the caption.

The video has garnered over 23,000 likes and tons of reactions. While many were overjoyed at the delightful video of the baby elephants, others showered their love for the adorable duo. 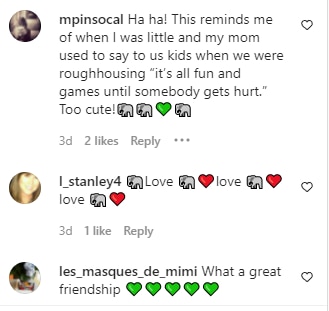 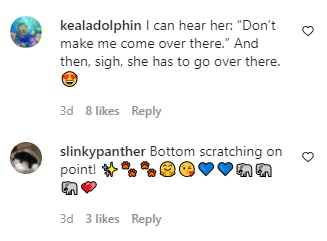 What are your thoughts on this cute clip?

ALSO READ| Family buys lunch for stranger in heartwarming viral video. What happened next will leave you in tears